Live video [January 29, 2011 only] of the route announcement party for RAGBRAI XXIX, the 39th annual Register's Great Bicycle Ride Across Iowa. The ride takes place during the last full week of July, which this year will be July 24-30, 2011. RAGBRAI's web site provides information on all aspects of the ride, including its long history since its inception in 1973.
Update: As announced on January 29, 2011, the route for RAGBRAI XXIX will traverse a total of 454 miles, climb a total of 20,206 feet, and feature the following host communities: Glenwood, Atlantic, Carroll, Boone, Altoona, Grinnell, Coralville, and Davenport.

The Wapsipinicon Almanac Fresh Off the Press 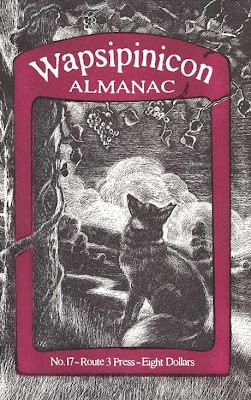 Volume 17 of the Wapsipinicon Almanac is now available for consumption. Published and printed since 1988 by Timothy Fay of Route 3 Press (Anamosa, Iowa), the present issue, as with previous numbers, features an engaging mix of essays, reviews, fiction, poetry, art, wit and wisdom. Ordering details are available on the Almanac's web site.

The cover shown here for the new volume is based on an original scratchboard drawing by Stone City artist Nancy Lindsay. Previous covers and contents pages, as well as a brief history of the Almanac, can be viewed at the web site. 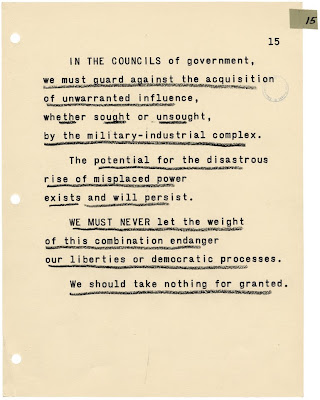 Fifty years ago today, on January 17, 1961, President Dwight D. Eisenhower delivered a televised Farewell Address to the nation, one that is recalled significantly for its introduction into political discourse of the phrase, "the military-industrial complex."

The Dwight D. Eisenhower Presidential Library and Museum provides online access to the entire address (including an audio recording), and to many additional documents that are related to its preparation and to its subsequent reception over a period lasting to the present era.

On January 19, 1966, for instance, a statement was entered into the Congressional Record that was entitled, "Statement on Fifth Anniversary of President Eisenhower's Farewell Address by Special Committee on the Military-Industrial Complex of the American Veterans Committee [PDF]." The speech, it is noted, was "wholeheartedly" endorsed by the Committee, who intended "to use its energy and resources to study the military-industrial complex in its many manifestations for the Nation."

The Quest for Peace and Justice

To commemorate this year's Martin Luther King, Jr. Day, here is a passage from Dr. King's Nobel Lecture, "The Quest for Peace and Justice," that he delivered on December 11, 1964 upon receiving the 1964 Nobel Peace Prize:

There is a sort of poverty of the spirit which stands in glaring contrast to our scientific and technological abundance. The richer we have become materially, the poorer we have become morally and spiritually. We have learned to fly the air like birds and swim the sea like fish, but we have not learned the simple art of living together as brothers.

Every man lives in two realms, the internal and the external. The internal is that realm of spiritual ends expressed in art, literature, morals, and religion. The external is that complex of devices, techniques, mechanisms, and instrumentalities by means of which we live. Our problem today is that we have allowed the internal to become lost in the external. We have allowed the means by which we live to outdistance the ends for which we live. So much of modern life can be summarized in that arresting dictum of the poet Thoreau: "Improved means to an unimproved end". This is the serious predicament, the deep and haunting problem confronting modern man. If we are to survive today, our moral and spiritual "lag" must be eliminated. Enlarged material powers spell enlarged peril if there is not proportionate growth of the soul. When the "without" of man's nature subjugates the "within", dark storm clouds begin to form in the world.

This problem of spiritual and moral lag, which constitutes modern man's chief dilemma, expresses itself in three larger problems which grow out of man's ethical infantilism. Each of these problems, while appearing to be separate and isolated, is inextricably bound to the other. I refer to racial injustice, poverty, and war.

The entire speech, along with numerous related documents, can be read on the Nobel Foundation's web site. It is noted there that King's lecture was not printed in its entirety when first reported in the New York Times, but was instead excerpted.

Documentation for all Nobel Peace Prize winners, as well as laureates in all fields, can also be found on the Foundation's site. President Obama, the Peace Prize winner in 2009, cited King among others in his Nobel Lecture entitled, "A Just and Lasting Peace." The text and video for Obama's lecture are both available online. Liu Xiaobo, the Peace Prize winner in 2010, is imprisoned by the Chinese government and did not attend last month's ceremonies. The Nobel site does, however, contain the text of Liu's document, "I Have No Enemies: My Final Statement." 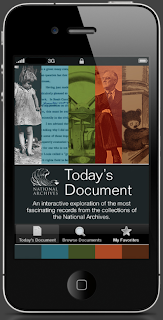 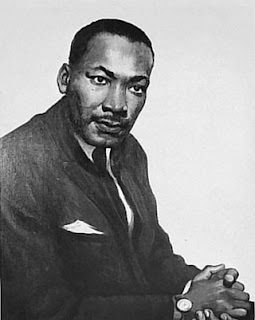 The National Archives and Records Administration (NARA) is now offering a mobile version of Today's Document, which is featured on the NARA web site. The application provides access to 365 documents and photographs, with background information available for each, among other functionalities.

The document for today happens to be a portrait of Dr. Martin Luther King, Jr., who was born on January 15, 1929. Created by Betsy G. Reyneau, the painting is part of NARA's donated collections, Record Group 200.

Wikipedia, the open access encyclopedia, is celebrating its tenth anniversary today, January 15, 2011, with hundreds of events scheduled around the world. Wikipedia's growth has been nothing less than phenomenal, with over 17 million articles of content distributed over 278 languages at present. English is the largest Wikipedia language, with over 3.5 million articles.

Wikipedia is hosted by the Wikimedia Foundation, which also sponsors numerous other projects, such as Wiktionary, Wikiquote, Wikibooks, Wikimedia Commons, etc.