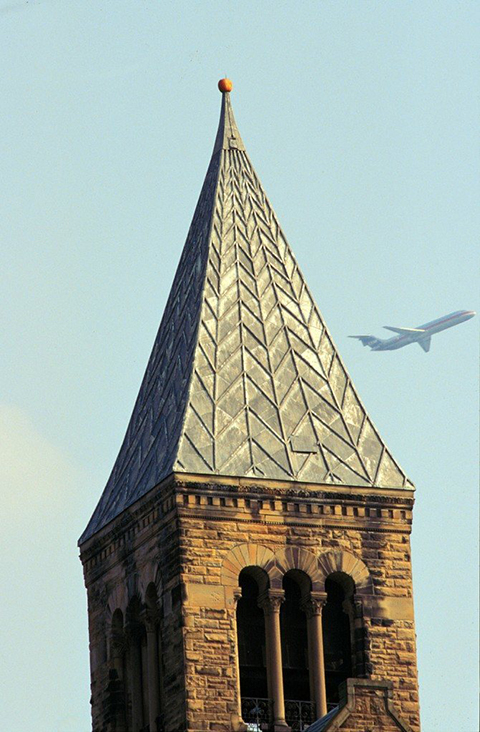 On the morning of October 8, 1997, it was observed that a pumpkin had mysteriously been placed overnight atop the spire of Cornell University's McGraw Tower. The Common Curator had just begun work at Big Red, and recalls the great buzz that the pumpkin created across campus--and beyond. Twenty years later, the identity of the perpetrator(s) of one of the greatest college pranks is still not known with certainty, although various explanations have been put forward.

Initially, it was unclear if the object was actually a pumpkin, as the tower is 173' tall. For pumpkin skeptics and conspiracists, a recent Cornell Chronicle article features a photo of the "Certificate of Authenticity" from the Kingsbury Commission (which intensively studied the matter) that unequivocally states: "It's a pumpkin." A thorough and fascinating summary of the events, and speculation, surrounding the incident has also recently been published by Atlas Obscura.

To mark the 20th anniversary, Cornell University Library is hosting a "PumpkinCam Redux," with much--but not all--of the content of the original website. Bits and cucurbits both decay, after all. Happy Halloween!

Note: the photo above is a Cornell University file photo.

UNESCO Statement on the Withdrawal of the United States from Membership

Irina Bokova, Director-General of UNESCO, delivered on October 12, 2017 a statement of "profound regret" on the decision of the United States to withdraw from the United Nations Educational, Scientific and Cultural Organization effective December 31, 2018. Bakova stated that "Universality is critical to UNESCO’s mission to strengthen international peace and security in the face of hatred and violence, to defend human rights and dignity," and delineated numerous initiatives, collaborations, and projects that have involved the United States, which was one of the original signers of the Constitution of UNESCO on November 16, 1945.

One notable UNESCO program achievement, in 2008, was the designation of Iowa City, Iowa as a UNESCO City of Literature. It was just the third city in the world to be accorded such recognition, and to date is the only such city in the United States. Iowa City UNESCO City of Literature Executive Director John Kenyon, in an article in the Iowa City Press-Citizen, observed that he was personally very disappointed by the withdrawal, and noted that "This decision has not made things better for UNESCO." He also remarked that "UNESCO's ability to better the world was compromised" when the United States ceased paying membership contributions in 2011 under the Obama administration.

A press statement by the U.S. Department of State earlier today indicates that UNESCO was informed, despite the withdrawal, of the United States' ongoing:


. . . desire to remain engaged with UNESCO as a non-member observer state in order to contribute U.S. views, perspectives and expertise on some of the important issues undertaken by the organization, including the protection of world heritage, advocating for press freedoms, and promoting scientific collaboration and education.

Meanwhile, the Iowa City Book Festival continues this week with its full slate of activities, including events celebrating the 50th anniversary of the International Writing Program. Festival highlights for today also include the bestowal of the Paul Engle Prize to this year's recipient, Alexander Chee.

Sputnik I Launches the Space Age 60 Years Ago

Euronews recounts in its Legends of Space series the story of the first artificial satellite to orbit the Earth, Sputnik I (Спутник-1), which was launched by the Soviet Union on October 4, 1957.

Designated in 2008 as one of the first UNESCO Cities of Literature in the world and still the only one in the United States, Iowa City will be hosting the ninth annual Iowa City Book Festival, October 8-15, 2017. In conjunction with the University of Iowa, FilmScene, the Iowa City Public Library, and the Iowa Arts Council, as well as other organizations and individuals, the expanded eight-day event will feature a Book Fair, readings by dozens of authors, and non-stop programming at many venues in and around downtown Iowa City.

In addition, many of this year's events will commemorate the 50th anniversary of the University of Iowa's International Writing Program, which was founded in 1967 by Paul Engle and Hualing Nieh  Engle. During this period, over 1,400 writers from more than 140 countries have spent a residency in Iowa City, where they have enriched the writing culture of the community while experiencing firsthand life at an American university. Also as part of the festival, this year's Paul Engle Prize will be awarded to Alexander Chee.

The 2017 Program can be downloaded as a PDF, and full details can be found at the festival website.