Where Is Chinese Artist Ai Weiwei? 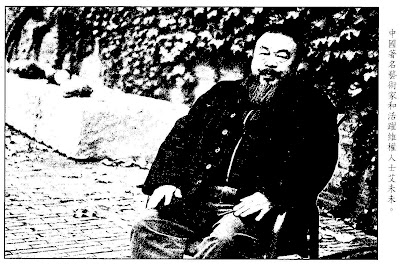 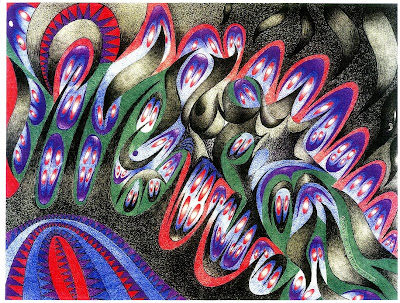 The Scarabocchio Art Museum (SAM), a joint venture of the University of Wisconsin--Stevens Point (UWSP) and the City of Stevens Point, is reopening May 31, 2011. Located in downtown Stevens Point, the gallery's reopening will coincide with the reception for Monoprint 2011: A Gathering of Artists, a weeklong workshop featuring 12 printmakers from the U.S. and abroad in residence at the University.

SAM was founded by Dr. David Smith, an emeritus faculty member in the Department of Art & Design at UWSP, and the reopening will have on display a retrospective of Smith's scarabocchio-style originals dating from 1973 to 2009. The Museum's current mission is to continue to serve as a venue for Smith's work, while providing opportunities for performing and fine arts activities and art-related education and programming through collaborative efforts. SAM hopes to provide a setting for events that enhance the cultural and intellectual growth of the community. The Curator of SAM is Brian Borchardt.

Note: Scarabocchio is Italian for scribble or doodle, and the term has been used by Professor Smith to describe his style of drawings, as shown in the image above, executed in 2009.

The Steering Committee of the Digital Public Library of America (DPLA) has announced a Beta Sprint to solicit ideas, recommendations, models, and so forth to inform the development of a large-scale digital library. The DPLA planning initiative is the outgrowth of a meeting in October 2010 at the Radcliffe Institute for Advanced Study, where representatives from numerous constituencies convened to discuss the creation of a national digital library. John Palfrey, chair of the DPLA Steering Committee, has stated:

As the DPLA planning initiative moves forward, we are optimistic that the DPLA community and public can help us think about what a DPLA might look like, in practical – and perhaps unexpected – ways, as platform, architecture, interface, and beyond. We hope geeks and librarians, especially, will join forces to develop beta submissions in support of this initiative.

Statements of Interest for the Beta Sprint are due by June 15, 2011, with final submissions due September 1, 2011. The DPLA Secretariat is located at the Berkman Center for Internet & Society at Harvard University, and further information on the DPLA can be found on the Berkman Center web site. The DPLA also maintains a planning initiative wiki and a listserv for public discussion.

Designed to serve the needs of today's "hybrid culture" of print and digital resources, the University of Chicago on May 16, 2011 opened the new Joe and Rika Mansueto Library, which is centrally located on campus and houses a high-density underground storage system with the capacity to hold 3.5 million volume equivalents. Judith Nadler, Director of the University Library, observed that: "We believe that having materials close by enhances their use, and that storing them remotely will do the opposite. By not providing ready access to materials, we de facto reduce their value, and we impact research in ways we wouldn’t want.”

Designed by architect Helmut Jahn, the the library is topped by an elliptical, glass dome which encloses the library's Grand Reading Room and other above-ground facilities for research, digitization, and preservation initiatives. The library will be formally dedicated on October 11, 2011 after the initial transfer of library materials is completed. For additional information on Mansueto Library's construction and operation, visit the library's web site.

125th Anniversary of the Haymarket Affair 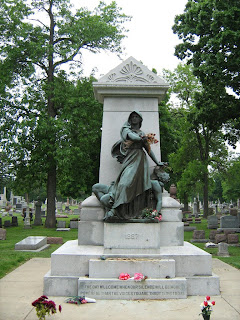 Aside from being the Society of American Archivist's MayDay: Saving Our Archives, May 1st is also International Workers' Day, and this year it commemorates the 125th anniversary of the Haymarket Affair in Chicago. The eight-hour workday was a central demand of the Chicago labor movement in the 1860s, and a week-long, city-wide strike began on May 1, 1867. The strike collapsed, but the issue remained, with the Federation of Organized Trades and Labor Unions in 1884 calling for workers to take direct action and begin observing the eight-hour day on May 1, 1886.

Numerous meetings, parades, and gatherings took place leading up to a strike on May 1, 1886. On May 3, two strikers were killed by police, which led to a protest meeting being called by anarchists at West Randolph Street Haymarket. The following day more violence ensued, when police moved to disperse another meeting and a bomb exploded. Many of the these events have been documented in the Haymarket Affair Digital Collection created by the Chicago History Museum. In addition to contextual essays, the collection provides access to trial documents, published materials, manuscripts, artifacts, broadsides, photographs and prints, and wood engravings depicting the events of Haymarket as recorded in the press.

The labor movement has long been fraught with controversy, and the eight-hour workday was not achieved until the Fair Labor Standards Act of 1938 was passed as part of the New Deal. The image above (Wikimedia Commons) depicts the Haymarket Martyrs' Monument, which was designated a National Historic Landmark in 1997. Erected in 1887 in Forest Park, Illinois, the inscription reads: "The day will come when our silence will be more powerful than the voices you are throttling today." 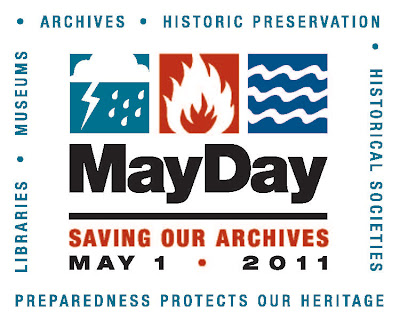 Since 2006, the Society of American Archivists (SAA) has designated May 1st as MayDay, or a day of action for both individuals and organizations such as archives, libraries, museums, and historical societies to improve their capacities to deal with emergencies that can threaten or destroy historical collections. The ravages of recent tornadoes in Alabama and other states is just one example of the physical risks facing cultural heritage institutions.

Although the landmark study, A Public Trust at Risk: The Heritage Health Index Report on the State of America's Collections (2005), systematically documented that most institutions lack an adequate disaster preparedness plan, the SAA has worked to mitigate these deficiencies. The SAA web site provides recommendations for MayDay activities, as well as a compilation of resources, including technical literature and tools, disaster plan templates and examples, tutorials and courses, bibliographies, and other resources.