From "Over the Rainbow" to "Straight Outta Compton," 25 New Selections Named to National Recording Registry

In the fifteenth year of the National Recording Registry, Librarian of Congress Carla Hayden has just announced 25 sound recordings as the official entries for 2016, stating: "This year's exciting list gives us a full range of sound experiences. These sounds of the past enrich our understanding of the nation's cultural history and our history in general."

Under the National Recording Preservation Act of 2000, selected recordings must be "culturally, historically, or aesthetically significant" and at least ten years old.
Spanning the years 1888-1997, the selections for 2016 are as follows:
The full National Recording Registry currently numbers 475 recordings, and can be viewed here. The Registry solicits nominations annually for inclusion on the registry; further information on the criteria and procedures for making nominations for 2017 is available at the Registry website

Rock & Roll legend Chuck Berry [1926-2017] died March 18th at age 90. Johnny B. Goode, one of his many pioneering songs (and featured above in a live performance), was recorded at Chess Studios on January 6, 1958 and released as a single a few months later on March 31st.

Love free-form radio? Then consider supporting independent station WFMU during its annual fundraising Marathon that runs March 5 through March 19, 2017. WFMU first hit the airwaves on April 24, 1958 at the now-defunct Upsala College and has never looked back. Currently based in Jersey City, New Jersey, WFMU broadcasts at 91.1 Mhz and via a second signal at 90.1 Mhz in Mount Hope, New York. WFMU has also long been an Internet pioneer, streaming its programming 24/7 in multiple formats, including iPhone and Android. An extensive archive of past shows is also available for easy access.
What is free-form radio you might ask? WFMU describes itself as follows:

And because the station is listener-supported, WFMU DJs have for years maintained complete autonomy and control over their own programming, which is extraordinarily eclectic. Check out the current WFMU audio smorgasbord, and see for yourself!

Note: The 2017 Marathon premium at the right was designed by Akira Yonekawa.

March for Science on Earth Day 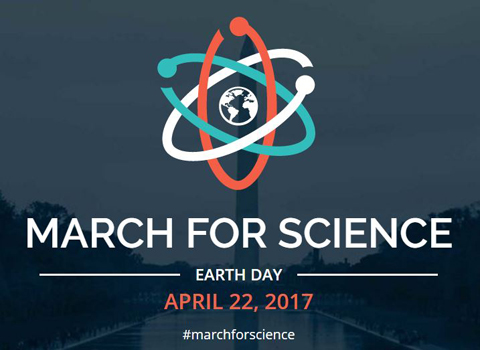 The March for Science will be held on Earth Day, April 22, 2017, in Washington, D.C. and at several hundred satellite locations throughout the United States and around the world. Thousands of scientists and scientific-minded individuals will be marching in solidarity to support the work of the scientific community and the critical role it plays in formulating sound, evidence-based public policy, particularly in the realms of public health and environmental protection.

The March for Science "champions robustly funded and publicly communicated science," and its stated goals for the upcoming event are to:


humanize science; partner with the public; advocate for open, inclusive, and accessible science; support scientists; and, affirm science as a democratic value.

Further information about the movement's goals and principles, as well details about local marches, can be found on the March for Science web site. Be there or be square!