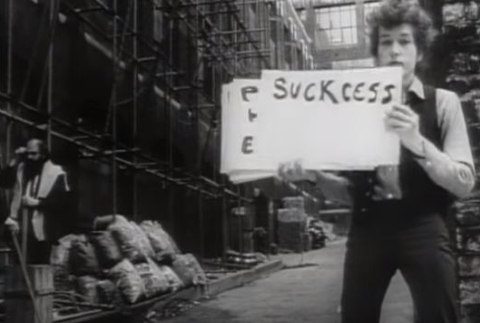 Bob Dylan was awarded the 2016 Nobel Prize in Literature today, his work being cited "for having created new poetic expressions within the great American song tradition." The image above is a still taken from the film accompanying his 1965 song, Subterranean Homesick Blues.

Designated in 2008 as one of the first UNESCO Cities of Literature in the world and still the only one in the United States, Iowa City will be hosting the eighth annual Iowa City Book Festival, October 4-9, 2016. In conjunction with the University of Iowa, FilmScene, the Iowa City Public Library, and the Iowa Arts Council, as well as other organizations and individuals, the newly expanded six-day event will feature a Book Fair, readings by numerous authors, and non-stop programming at many venues in and around downtown Iowa City. The 2016 Program can be downloaded as a PDF, and full details can be found at the festival website.

Sponsored by the American Library Association and allied organizations, Banned Books Week is an annual celebration of the freedom to read. It began in 1982 in response to widespread censorship of books, and since that time over 11,000 books have been challenged in communities throughout the United States.The American Library Association's Office for Intellectual Freedom has been documenting cases of challenged and banned books since 1990, and the ALA's Library Bill of Rights strongly supports free and unfettered access to information and ideas. Internationally, the Index on Censorship is an organization that promotes and defends the right to freedom of expression.