Seed Savers Exchange (SSE), one of world's leading organizations dedicated to the preservation of heirloom seeds, has launched a fundraising campaign through Indiegogo's Generosity platform to raise $80,000 for an upgraded and enlarged facility to house its growing collection of over 20,000 varieties of seeds. The current storage space has developed structural issues that could potentially compromise the integrity of the collection. To learn more about the project, or to make a contribution, please visit SSE's campaign webpage.

Dr. Carla Hayden Sworn in as Librarian of Congress

Dr. Carla Hayden was sworn in as the 14th Librarian of Congress by Chief Justice John G. Roberts, Jr. on September 14, 2016. Nominated by President Obama on February 24, 2016, Dr. Hayden was confirmed by the U.S. Senate after her confirmation hearing on April 20, 2016. She is both the first woman and first African American to serve as Librarian of Congress since the Library was established in 1800.

The National Book Festival: Journey to the Unknown 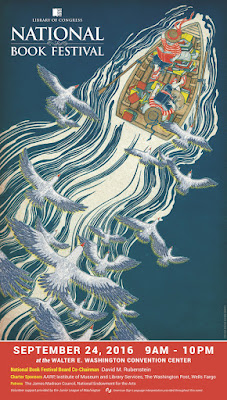 The 16th annual National Book Festival, organized and sponsored by the Library of Congress, will be held on Saturday, September 24, 2016, at the Walter E. Washington Convention Center in Washington, D.C. The festival is free and open to the public.

More than 120 authors, poets, and illustrators will be making presentations throughout the day in the theme-based pavilions for Children, Teens, Books to Movies, Contemporary Life, Fiction, Food & Home, Graphic Novels, History & Biography, International, Poetry & Prose, and Science. Keynote speakers on the main stage include Stephen King, Kareem Abdul-Jabbar, Shonda Rhimes, Bob Woodward, Raina Telgemeier, and Salman Rushdie.
Further information, including a schedule of events and a map of the festival grounds, can be found at the festival website. Mobile apps are also available for the Festival. This year's poster was designed by Yuko Shimizu; a gallery of all Festival posters from 2001 to 2016 can be viewed here.