American Library Association (ALA) President Julie B. Todaro on January 30, 2017 released the following statement on behalf of the ALA that reasserts the association's commitment to core values concerning access to information, intellectual freedom, diversity, social responsibility, and other issues:

“We are shocked and dismayed by recent executive orders and other actions by the new administration, which stand in stark contrast to the core values of the American Library Association. Our core values include access to information; confidentiality/privacy; democracy; equity, diversity and inclusion; intellectual freedom; and social responsibility.

“The American Library Association strongly opposes any actions that limit free access to information, undermine privacy, or discriminate on any basis. This includes the temporary suspension of visas and entrance to the US based on anyone’s nationality or religion as well as the increased scrutiny of any individual’s communication such as mobile phone and/or social media activity.

“Our nation’s 120,000 public, academic, school, and special libraries serve all community members, including people of color, immigrants, people with disabilities and the most vulnerable in our communities, offering services and educational resources that transform communities, open minds, and promote inclusion and diversity.

“ALA believes that the struggle against racism, prejudice, stereotyping, and discrimination is central to our mission. We will continue to speak out and support efforts to abolish intolerance and cultural invisibility, stand up for all the members of the communities we serve, and promote understanding and inclusion through our work.

“We will continue to speak out and support our members as they work tirelessly for access to library and information resources on behalf of all of their community members, while advocating for privacy, intellectual freedom, critical global research, information literacy, ongoing access to scientific research, and fair and equitable treatment for everyone.

“As our strategic plan states, ‘ALA recognizes the critical need for access to library and information resources, services, and technologies by all people, especially those who may experience language or literacy-related barriers; economic distress; cultural or social isolation; physical or attitudinal barriers; racism; discrimination on the basis of appearance, ethnicity, immigrant status, housing status, religious background, sexual orientation, gender identity, gender expression; or barriers to equal education, employment and housing.’

“We encourage our members to continue to speak out and show their support for and work on behalf of our core values, in their communities as well as with their local, state, and national elected and appointed officials. Additionally, ALA has tools and resources online to help you advocate for our core values:
“ALA is committed to using its national platform for speaking up and speaking out for its members and constituents in these chaotic, unprecedented, and challenging times. We appreciate the library community’s continued support.”

Mother of Exiles: Send These, the Homeless, Tempest-tost to Me 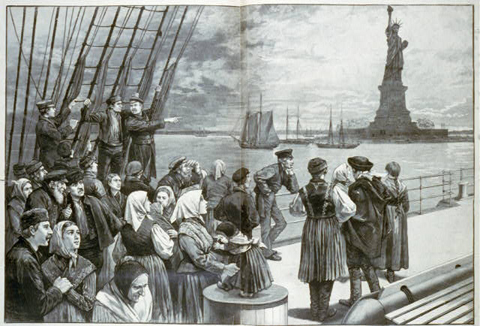 
Not like the brazen giant of Greek fame,
With conquering limbs astride from land to land; Here at our sea-washed, sunset gates shall stand A mighty woman with a torch, whose flame Is the imprisoned lightning, and her name Mother of Exiles. From her beacon-hand Glows world-wide welcome; her mild eyes command The air-bridged harbor that twin cities frame. "Keep ancient lands, your storied pomp!" cries she With silent lips. "Give me your tired, your poor, Your huddled masses yearning to breathe free, The wretched refuse of your teeming shore. Send these, the homeless, tempest-tost to me, I lift my lamp beside the golden door!" 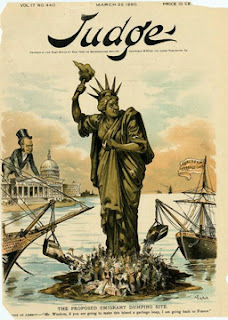 Emma Lazarus [1849-1887] wrote "The New Colossus" on November 2, 1883, and donated it for use by the Art Loan Fund Exhibition in Aid of the Bartholdi Pedestal Fund for the Statue of Liberty. A source of inspiration to countless new immigrants and Americans alike, it was inscribed on a plaque on the pedestal of the Statue of Liberty in 1903. Then as now, however, Nativists and others have opposed immigration on various grounds, as the political cartoon to the right, captioned "The Proposed Emigrant Dumping Site," reveals (Judge, March 22, 1890).
The Statue of Liberty Enlightening the World was a gift from the people of France to the United States. Dedicated on October 28, 1886, it was designated as a National Monument in 1924, and has been maintained by the National Park Service since 1933.

Note: The image at the top first appeared in Frank Leslie's Illustrated Newspaper on July 2, 1887 at pp. 324-325; it was entitled "New York -- Welcome to the Land of Freedom -- An Ocean Steamer Passing the Statue of Liberty: Scene on the Steerage Deck [of the "Germanic"] / from a sketch by a staff artist." Further information on this item is available via the Library of Congress' Prints and Photographs Online Catalog.