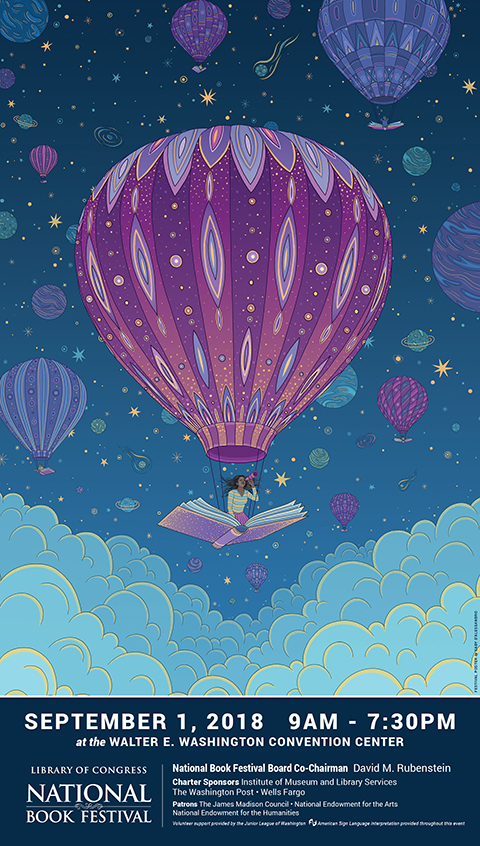 The 18th annual National Book Festival, organized and sponsored by the Library of Congress, will be held on Saturday, September 1, 2018, at the Walter E. Washington Convention Center in Washington, D.C. The festival is free and open to the public.

Further information, including a schedule of events and a map of the festival grounds, can be found at the festival website. Mobile apps are also available for the Festival. This year's poster was designed by Gaby D'Allesandro; a gallery of all Festival posters from 2001 to 2018 can be viewed here. 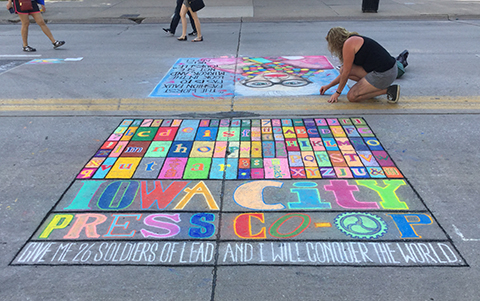 The Iowa City Press Co-op (ICPC) was well represented at the 3rd annual Rock the Chalk, a community art festival sponsored by MidWestOne Bank on August 10, 2018. Artist Carla Bryant based her design for ICPC on the California job case, a standard layout that has been used by letterpress printers for generations to organize and store lead type. The image is anchored by a quotation said to be from Poor Richard's Almanack, which was published annually from 1732 to 1758 by the polymath Benjamin Franklin.

Several members of ICPC assisted in transforming Carla's outline into a polychromatic piece of street ephemera. The chalk image on the other side of the center-line features a portrait of the New York designer and fashion icon, Iris Apfel. Dozens of artists and community organizations participated in this year's event.

For those interested in printing and the book arts, the ICPC offers both equipment and workshops. The Fall 2018 schedule has just been released, and can be viewed at the ICPC web site.

In an unprecedented act in American history, Richard Nixon, the 37th president of the United States, abdicated his office 44 years ago today, on August 9, 1974. On the evening of August 8, he made a nationally-televised speech laying out his decision, noting at the outset that it was the weakening of his political base that motivated his resignation rather than any particular moral, ethical, or legal concerns related to Watergate and other matters:


Throughout the long and difficult period of Watergate, I have felt it was my duty to persevere, to make every effort possible to complete the term of office to which you elected me. In the past few days, however, it has become evident to me that I no longer have a strong enough political base in the Congress to justify continuing that effort. As long as there was such a base, I felt strongly that it was necessary to see the constitutional process through to its conclusion, that to do otherwise would be unfaithful to the spirit of that deliberately difficult process and a dangerously destabilizing precedent for the future. But with the disappearance of that base, I now believe that the constitutional purpose has been served, and there is no longer a need for the process to be prolonged. [full transcript]

* Noted for his innumerable Twitterisms, president-elect Trump tweeted the misspelled "unpresidented" rather than "unprecedented" in a bellicose tweet directed at China on December 17, 2016, well before assuming office. In contrast, it was a diplomatic highlight of Nixon's tenure [1969-1974] that he pursued rapprochement with the People's Republic of China (P.R.C.), lifting a trade embargo in 1971, and in February 1972, engaging in direct talks with Zhou Enlai and Mao Zedong during the first trip by an American president to the P.R.C. At the conclusion of the seven-day visit, both parties jointly issued the Shanghai Communiqué, which laid the groundwork for the subsequent establishment of diplomatic relations. 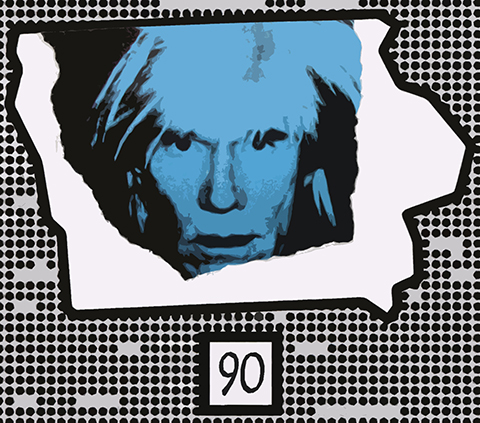 Today is the 90th anniversary of the birth of artist Andy Warhol [1928-1987]. The eponymous Andy Warhol Museum is said to be the largest in the United States dedicated to the work of a single artist, and houses the largest collection of Warhol art and archives in the world.

Among the Museum's holdings is Warhol's experimentation in 1985 with digital art using an Amiga 1000 computer supplied to him by Commodore International. Using ProPaint software, Warhol executed a portrait of singer Debbie Harry of Blondie during a live product launch. Warhol later made several other electronic images, including a version of one of his notorious Campbell's Soup paintings, a series of 32 varieties first exhibited in 1962.