NASA astronauts aboard the International Space Station (ISS) have grown and consumed produce in space for the first time, a small crop of red romaine lettuce. Further information on the Veggie greenhouse system used on ISS is available in this NASA interview with the developer. 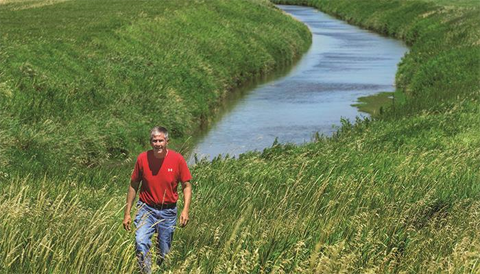 Tim Smith, the owner-operator of the Smith Farm in north-central Iowa, has received the 2015 Iowa Soil Conservation Farmer of the Year Award, which has been sponsored by the Iowa Farm Bureau (IFB) since 1952.

As cited in the IFB news release:


Smith’s Wright County family farm uses many conservation practices to protect the environment and each brings its own set of measureable improvements and added benefits; strip-till and no-till planting and cover crops boost soil organic matter. Grassy waterways, field borders and a bioreactor serve to slow and filter rainfall. And prairie strips, planted with native grasses and forbs not only prevent runoff, they provide habitat for a variety of bird species. Smith also uses a nutrient management plan for all his fields.

Smith's contributions to conservation advocacy were also noted, as he given numerous field demonstrations, media interviews, and hosted tours for agricultural representatives from Europe, as well as made presentations to middle school students in Des Moines and graduate students from Iowa State University.

The Advent of Atomic Weaponry: Hiroshima and Nagasaki

A Day That Shook the World, a short British Pathé film from 1945, briefly describes the dropping of "Little Boy," the first atom bomb to be used as a weapon, on the city of Hiroshima at 8:15am on August 6, 1945 (Japan time). It was quickly followed by the dropping of "Fat Man" on Nagasaki on August 9, 1945. Both caused unprecedented death and destruction.

A previous Common Curator post, The Legacy of Hiroshima and Nagasaki, discusses, among other matters, Tsutomu Yamaguchi [1916-2010], who at the time of his death was the only nijyuu hibakusha, or "twice-bombed person," officially recognized by the Japanese government. Other resources of interest are Democracy Now's interview with Japanese Nobel Laureate Kenzaburo Oe and the National Archives' photographs and sound recordings documenting the Hiroshima bombing.