The True University of These Days Is a Collection of Books 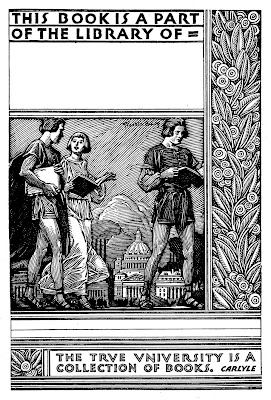 Designed by the American illustrator, Franklin Booth [1874-1948], this bookplate is printed directly on the front paste-down of A German-English Dictionary for Chemists by Austin Patterson. Booth has slightly truncated the quotation from Thomas Carlyle [1795-1881], which is found in his On Heroes and Hero-Worship, and reads in full as "The true University of these days is a Collection of Books."

According to Wikipedia, Booth's distinctive style was derived from his practice as a young boy of emulating illustrations he found in magazines, thinking them to be pen-and-ink drawings when they were in fact wood engravings. 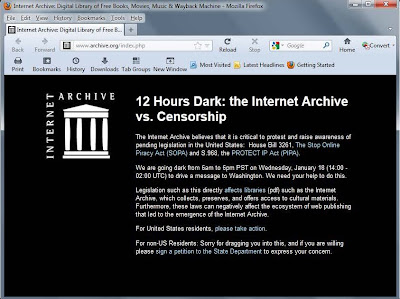 As stated on its blackout page: The Internet Archive believes that it is critical to protest and raise awareness of pending legislation in the United States: House Bill 3261, the Stop Online Piracy Act (SOPA) and S.968, the PROTECT IP Act (PIPA).

For non-US Residents: Sorry for dragging you into this, and if you are willing please sign a petition to the State Department to express your concern. 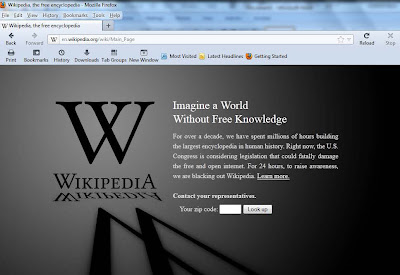 On January 18, 2012, the Wikipedia community is blacking out millions of articles of content in the English version for 24 hours to protest pending US legislation: the Stop Online Piracy Act (SOPA) and the Protect IP Act (PIPA). The decision to withdraw content was made by the global community of Wikipedia editors and is supported by the Wikimedia Foundation, which is the non-profit organization that operates Wikipedia and numerous related projects.

SOPA and PIPA cripple the free and open internet. They put the onus on website owners to police user-contributed material and call for the blocking of entire sites, even if the links are not to infringing material. Small sites will not have the sufficient resources to mount a legal challenge. Without opposition, large media companies may seek to cut off funding sources for small competing foreign sites, even if big media are wrong. Foreign sites will be blacklisted, which means they won't show up in major search engines.

In a post SOPA/PIPA world, Wikipedia --and many other useful informational sites-- cannot survive in a world where politicians regulate the Internet based on the influence of big money in Washington. It represents a framework for future restrictions and suppression. Congress says it's trying to protect the rights of copyright owners, but the "cure" that SOPA and PIPA represent is much more destructive than the disease they are trying to fix. 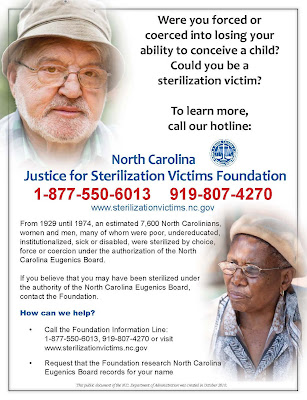 In 1972 the Eugenics Board became the Eugenics Commission, and was finally abolished in 1977. In 2002, the state of North Carolina formally apologized to the victims of sterilization, and in 2003 the General Assembly repealed the law that authorized involuntary sterilization.

On March 8, 2011, Governor Beverly Perdue issued Executive Order 83 to create the Governor's Task Force to Determine the Method of Compensation for Victims of North Carolina's Eugenics Board, which functions with the support of the North Carolina Justice for Sterilization Victims Foundation. After months of investigation and public hearings, the Task Force issued a preliminary report on August 1, 2011 and three additional reports on December 6, 2011.

At its most recent meeting on January 10, 2012, the Task Force voted on its final recommendations, which included the recommendation that the state pay $50,000 to each surviving victim. In response, Governor Perdue issued the following statement:

Thank you to the devoted members of this task force for months of diligent, careful and thoughtful work to address one of the most difficult and emotionally wrenching issues in our state’s history.

While no amount of money will ever make up for the fact that government officials deprived North Carolinians, mostly women, of the possibility of having children—and officials did so, in most cases, without the victims’ consent or against their will—we must do something. I support the task force’s compensation proposal. I also agree that we should establish a permanent exhibit so that this shameful period is never forgotten. I look forward to reviewing the details of the task force’s recommendations.

Although it is unknown at present how many survivors there are, it is estimated that there may be as many as 1500 to 2000. The North Carolina Justice for Sterilization Victims Foundation strongly encourages anyone believing he or she was sterilized under the authority of the Eugenics Board of North Carolina to contact them for assistance in documenting a potential claim.

Readers interested in learning more about the historical background of eugenics can check out Eugenics in North Carolina at the State Library of North Carolina web site, as well as the Winston-Salem Journal's project, Against Their Will: North Carolina’s Sterilization Program.

In addition, the North Carolina History of Health Digital Collection, a grant project initiated and directed by the Common Curator, contains all volumes of the Biennial Report of the Eugenics Board of North Carolina [1934-1966], and the survey report, Eugenical Sterilization in North Carolina [1935]. 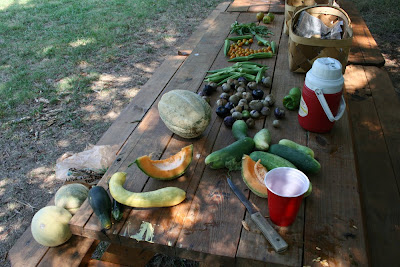 "Growing It Here, Growing It Now," the recent Common Curator documentary about community gardening in Carrboro, North Carolina, will be having additional showings this week on several local television stations:

The documentary was directed and produced by Daniel Smith; for a description, check out the announcement in a previous Common Curator post. The film is available on DVD for $10 postpaid, and can be ordered by emailing the Common Curator.

"Occupy" Voted Word of the Year by American Dialect Society

The American Dialect Society, during its annual conference on January 6, 2012, voted "occupy" as its Word of the Year for 2011. Founded in 1889, the organization is devoted to the study of the English language--and of other languages and dialects influencing English--in North America. It counts among its members "linguists, lexicographers, etymologists, grammarians, historians, researchers, writers, authors, editors, professors, university students, and independent scholars." Membership is open to anyone.

The Society began voting on Words of the Year in 1990, although it does not regard its selections as conferring any official status on lexical items. Rather it seeks to emphasize that language change is a normal, ongoing process; indeed, earlier winners such as "Y2K" and "chad" are examples of words that have fallen into relative disuse.

In addition to Word of the Year, additional categories are voted on; below are listed all the winners for 2011:

Word of the Year
occupy -- verb, noun, and combining form referring to the Occupy protest movement.

Most Useful
humblebrag -- expression of false humility, especially by celebrities on Twitter.

Most Creative
Mellencamp -- a woman who has aged out of being a “cougar” (after John Cougar Mellencamp).
Most Unnecessary
bi-winning -- term used by Charlie Sheen to describe himself pridefully, dismissing accusations of being bipolar.

Most Euphemistic
job creator -- a member of the top one-percent of moneymakers.
Most Likely to Succeed
cloud -- online space for the large-scale processing and storage of data.
Least Likely to Succeed
brony -- adult male fan of the “My Little Pony” cartoon franchise.
Occupy Words (new category)
the 99%, 99 percenters -- those held to be at a financial or political disadvantage to the top moneymakers, the one-percenters.

In commenting on this year's Word of the Year, Ben Zimmer, chair of the Society's New Words Committee, observed: “It’s a very old word, but over the course of just a few months it took on another life and moved in new and unexpected directions, thanks to a national and global movement. The movement itself was powered by the word.”

Visit the American Dialect Society's website to learn more about this year's contest and past winners. In a related vote, the American Name Society chose "Arab Spring" as its Name of the Year for 2011.

Note: The pervasiveness of "Occupy" is evidenced even by its presence as part of Bill Griffith's Zippy cartoon for January 8, 2012.

Hydrofracking: An Integrative Workshop at Duke

On January 9, 2012, Duke University will be holding a one-day workshop: Environmental and Social Implications of Hydraulic Fracturing and Gas Drilling in the United States: An Integrative Workshop for the Evaluation of the State of Science and Policy. Sponsored by the Nicholas School of the Environment and the School of Law, the event is open to the public, but seating is limited and registration is required. The workshop will bring together industry representatives, scientists, governmental regulatory agencies, and environmentalists, and will feature sessions on the Environmental Protection Agency, major scientific findings, and the legal and socio-economic aspects of hydrofracking.

Note: The video and graphic above are from ProPublica, which has investigated environmental issues related to hydrofracking around the country.

Growing It in the New Year 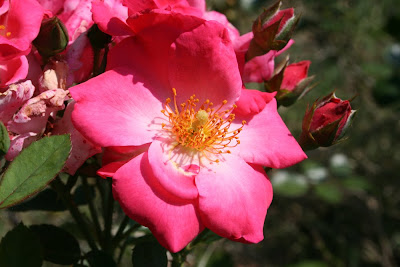 "Growing It Here, Growing It Now," the recent Common Curator documentary about community gardening in Carrboro, North Carolina, will be having its first showings of the new year on several local television stations:

The documentary was directed and produced by Daniel Smith; for a description, check out the announcement in a previous Common Curator post. The film is available on DVD for $10 postpaid, and can be ordered by emailing the Common Curator. 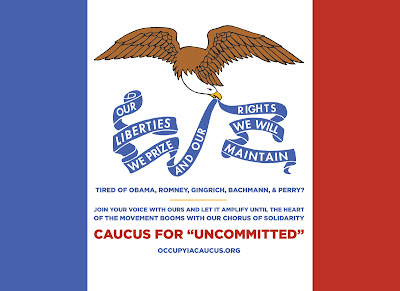 Occupy Iowa Caucus has committed to "Uncommitted" for both the Republican & Democratic slates at the Iowa caucuses to be held on January 3, 2012. To learn more, visit the OIC website. 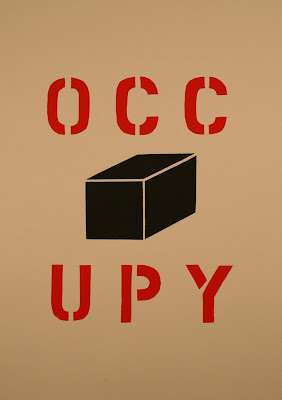 Screen-printed design by the Common Curator, 2011.