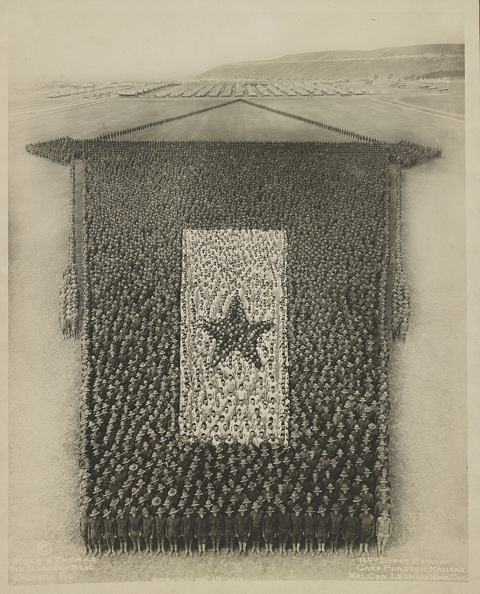 In honor of Memorial Day, above is shown a living (or formation) photograph circa 1918 depicting the service flag of the U.S. Armed Forces. It was produced by Arthur Mole and John Thomas with the assistance of hundreds if not thousands of troops of the 164th Depot Brigade stationed at Camp Funston in Fort Riley, Kansas. Technically complex to stage, the pair created around 30 such photographs on patriotic themes at various military camps during World War I.

Iowa Governor Terry Branstad visited the Tim Smith Farm on May 4, 2016 as part of on ongoing tour to learn about soil conservation practices and strategies that are being used by environmentally concerned farmers to improve soil health and mitigate the effects of agriculture on water quality in the state. The video above was produced by Joe Murphy of the Iowa Soybean Association (ISA), and includes interviews with Governor Branstad, Kirk Leeds (CEO of ISA), and Smith, as well as scenes of conservation practices on several different farms. The ISA web site also features a recent article on Smith's work. 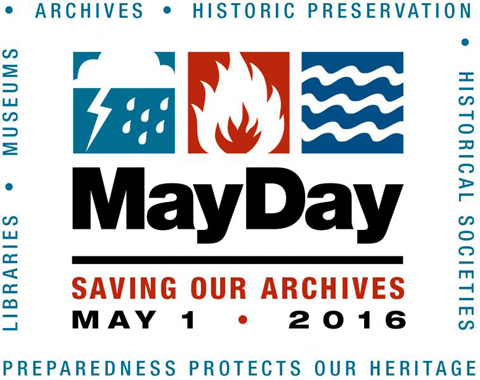 Since 2006, the Society of American Archivists (SAA) has designated May 1st as MayDay, or a day of action for both individuals and organizations such as archives, libraries, museums, and historical societies to improve their capacities to deal with emergencies that can threaten or destroy historical collections. The ravages of natural disasters such as the tornadoes and hurricanes of recent years are just some of the physical risks facing cultural heritage institutions.

Although the landmark study, A Public Trust at Risk: The Heritage Health Index Report on the State of America's Collections (2004 & 2014 follow-up report), systematically documented that most institutions lack an adequate disaster preparedness plan, the SAA has worked to mitigate these deficiencies. The SAA web site provides recommendations for MayDay activities, as well as a compilation of resources, including technical literature and tools, disaster plan templates and examples, tutorials and courses, bibliographies, and other resources.

In recent years, the State Historical Society of Iowa (SHSI) has undergone severe cuts to both collections and services, which are documented in detail in a recent White Paper produced by the Save Iowa History Alliance. Leading historians on both a state and national level have addressed their concerns directly to Governor Branstad and to Mary Cownie, Director of the Iowa Department of Cultural Affairs, which oversees the SHSI.

Further details on these efforts, as well as contact information for key decision-makers, is available in the previous Common Curator posts: Save Iowa History and Save Iowa History 3. The complete White Paper on the State Historical of Iowa can be downloaded as a PDF.