April Is the Coolest Month

It is fitting that the National Archives and Records Administration (NARA) announced during Poetry Month that Kenneth Price, professor at the University of Nebraska--Lincoln and co-editor of the Walt Whitman Archive, had conclusively identified nearly 3,000 documents as the work--at least in part--of Walt Whitman. Whitman lived in Washington, D.C. from 1863 to 1873, and was employed variously as a government clerk, copyist, and scribe in offices of the Army Paymaster, the Bureau of Indian Affairs, and the Attorney General. The exact nature of Whitman's intellectual contributions to these documents will require further study and elaboration, but the documents nonetheless represent an important new archival facet in the life of one of America's greatest poets.

Further resources on Whitman are available at the Walt Whitman Archive, and at the Library of Congress, which has the largest Whitman archives in the world (a guide is available online). A portrait of Whitman as an older man, as well as a link to an online version of his Leaves of Grass (1855), can be found at an earlier Common Curator posting. 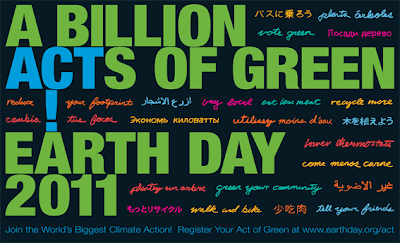 Earth Day was first celebrated on April 22, 1970. Founded by former US Senator Gaylord Nelson as an environmental teach-in, Earth Day is now coordinated by Earth Day Network, with programming and events around the world. In 2009, the United Nations also declared April 22 to be International Mother Earth Day, an observance that "recognizes a collective responsibility, as called for in the 1992 Rio Declaration, to promote harmony with nature and the Earth to achieve a just balance among the economic, social and environmental needs of present and future generations of humanity."

One option for observing Earth Day is to become a member of Seed Savers Exchange, which supports a grassroots movement of gardeners working to insure a healthy food supply for future generations. A current special membership offer includes the following benefits:

:: Access to the Seed Savers Exchange Yearbook, a directory of our community of nearly 700 members who save seeds and make them available to other members across the country.

:: A 10% discount on all purchases from the Seed Savers Exchange catalog and from the Lillian Goldman Visitors Center at Heritage Farm.

:: Reciprocal admissions with the American Horticultural Society to public gardens and arboretums across the country.

With the words "Let's go (Poyekhali)!" on the morning of April 12, 1961, Soviet cosmonaut Yuri Gagarin blasted off from the Baikonur launch site in a Vostok 1 spacecraft. During his brief 108-minute flight, Gagarin made one orbit around Earth, attaining a speed of over 27,000 kilometers per hour and an altitude of 327 kilometers, and thereby becoming the first human in space. (The first animal in space, incidentally, was the dog, Laika, launched by the Soviets on Sputnik 2 on November 3, 1957; unfortunately, Laika died during the mission).

Gagarin was 27 at the time of his momentous spaceflight, having been born on March 9, 1934. He had graduated from the Soviet Air Force Academy in 1957, and was chosen to train among the first group of Soviet cosmonauts. He never made a second space launch, and was killed while piloting a MIG15 jet during a training mission on March 27, 1968.

Note: The video here was produced by Roscosmos TV-Studio. Other Gargarin-related resources include the Russian Federal Space Agency (English version); YuriGagarin50.org (UK); and NASA (US).

First sponsored in 1958, National Library Week is a national observance sponsored by the American Library Association (ALA) and libraries across the country each April. Bestselling author John Grisham is the Honorary Chair for this year, and is shown in the video above reminiscing about the importance of libraries and their place in his life.

The Minnesota Center for Book Arts Prize is the first honor in the United States to recognize book art from across the field and around the world. The MCBA Prize celebrates the diversity of book art and encourages discussion rather than limiting recognition to one aspect of this vital field.

A jury of three distinguished leaders in the field of book arts will review all submissions, and narrow the field to five finalists. These five works will appear on display at Minnesota Center for Book Arts during Book Art Biennial 2011. From these five works, the jury will select the recipient of this year's MCBA Prize.

Please review the MCBA Prize 2011 entry guidelines before submitting work through the online submission form. The deadline for submissions is April 8, 2011.

As the largest and most comprehensive center of its kind in the nation, Minnesota Center for Book Arts celebrates the book as a vibrant contemporary art form that takes many shapes. From the traditional crafts of papermaking, letterpress printing and bookbinding to non-traditional artmaking and self-publishing techniques, MCBA supports the limitless creative evolution of book arts. To learn more, visit the MCBA website.

The Origin of April Fool's Day

Though the definitive origin of April Fool's Day is doubtless unknowable, it has itself been the subject of an April Fool's Day hoax. According to the Museum of Hoaxes, which has an entertaining list of its Top 100 April Fool's Day Hoaxes online, the Associated Press (AP) reported in 1983 that Boston University history professor, Joseph Boskin, had discovered that the holiday was first celebrated under the Roman Emperor Constantine. By Boskin's account, a court jester had asserted to the emperor that fools and jesters could rule the kingdom better than he, and therefore the emperor mandated that one day of the year would be reserved for them to prove their claim. The emperor appointed the jester Kugel to be the first ruler-for-a-day, and thus began the tradition of April Fool's Day. This story was widely republished, although Professor Boskin acknowledged it was bogus a few weeks later.

The short video above was posted to YouTube by Boston University on April 1, 2009, and features Professor Boskin briefly retelling his 1983 fabrication; the video annotation at the YouTube link provides additional background, including this observation from Fred Bayles, the AP reporter taken in by Boskin's initial story: "Be very, very wary of what someone, particularly someone talking about April Fools' Day, tells you. It also illustrates a professor's responsibility not to screw around with someone's career — and the integrity of a university."