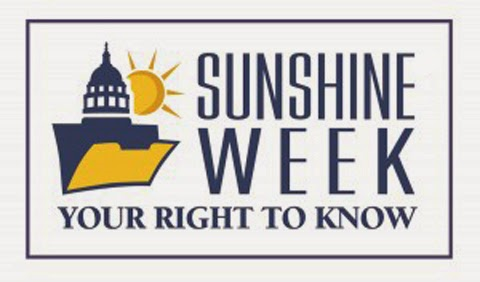 March 13-19, 2016 marks Sunshine Week, an annual event which serves to raise awareness of the need for transparent and open government at all levels. Freedom of Information Day is also being observed on March 16, which coincides with James Madison's birthday. In 1822, Madison stated:


A popular Government without popular information or the means of acquiring it, is but a Prologue to a Farce or a Tragedy or perhaps both. Knowledge will forever govern ignorance, and a people who mean to be their own Governors, must arm themselves with the power knowledge gives.

Sunshine laws such as the Freedom of Information Act (FOIA) and open meetings laws provide essential legal rights and remedies for citizen access to government records and information. FOIA, which was signed into law by President Lyndon Johnson on July 4, 1966 and went into effect one year later, created a "right to know" as the basis for access whereas previously citizens needed to demonstrate a "need to know." As Johnson observed at the time:

This legislation springs from one of our most essential principles: a democracy works best when the people have all the information that the security of the Nation permits. No one should be able to pull curtains of secrecy around decisions which can be revealed without injury to the public interest.

On March 15, 2016, the U.S. Senate passed Senate Bill 337 which contains a set of amendments to FOIA that would create a specific presumption of openness as well as other enhancements to government access if signed into law by the President. Further details can be found at the Fix FOIA by 50 Clearinghouse. The need for updates to FOIA is well illustrated by the Electronic Frontier Foundation's compilation of "the worst government responses to public records requests" during the last year.

For further information, the following resources may be of interest: The National Freedom of Information Coalition; The National Security Archive; The Center for Effective Government; The American Civil Liberties Union; The Electronic Frontier Foundation; and, for news of international freedom of information advocacy, FreedomInfo.org.

International Women's Day: Step It Up for Gender Equality

First celebrated on March 19, 1911 by more than one million people in Austria, Denmark, Germany, and Switzerland after a proposal by Clara Zetkin [1857-1933] in 1910 at the second International Conference of Working Women in Copenhagen, International Women's Day is now observed in many nations throughout the world.

Love free-form radio? Then consider supporting independent station WFMU during its annual fundraising Marathon that runs March 6 through March 20, 2016. WFMU first hit the airwaves on April 24, 1958 at the now-defunct Upsala College and has never looked back. Currently based in Jersey City, New Jersey, WFMU broadcasts at 91.1 Mhz and via a second signal at 90.1 Mhz in Mount Hope, New York. WFMU has also long been an Internet pioneer, streaming its programming 24/7 in multiple formats, including iPhone and Android. Past shows are archived at the station's website, as is ten year's of the station's Beware of the Blog.

And because the station is listener-supported, WFMU DJs have for years maintained complete autonomy and control over their own programming, which is extraordinarily eclectic. Check out the current WFMU audio smorgasbord, and see for yourself!