This charming cinematic ode to the book, directed by William Joyce and Brandon Oldenburg of Moonbot Studios, won the 2012 Academy Award for Animated Short Film. Their responses to the Academy's questionnaire for nominees can be read here.

Fifty years ago today, on February 20, 1962, NASA astronaut John Glenn became the first American to orbit Earth in the Mercury spacecraft he named "Friendship 7." Glenn orbited the planet three times in a flight that lasted just under five hours. In 1963, NASA transferred the recovered space capsule to the Smithsonian National Air and Space Museum, which describes his historic mission as follows:


Glenn's flight was the third manned mission of Project Mercury, following two suborbital flights by astronauts in 1961. Glenn's three-orbit mission on February 20, 1962, was a sterling success, as he overcame problems with the automatic control system that would have ended an unmanned flight. But reentry was tense, as a faulty telemetry signal from the spacecraft indicated that the heat shield might be loose. Mission Control instructed Glenn not to jettison the retrorocket package after firing in order to better hold the heat shield in place. Glenn reentered successfully and splashed down in the Atlantic 4 hours, 55 minutes and 23 seconds after launch.

Glenn was preceded into orbit by the Soviet cosmonauts Yuri Gagarin, who as the first human in space made one orbit on April 11, 1961, and Gherman S. Titov, who made 17 orbits after launching on August 6, 1961. Alan Shepard and Gus Grissom were the first and second Americans in space, but flew suborbital missions, on May 5, 1961 and July 21, 1961, respectively. 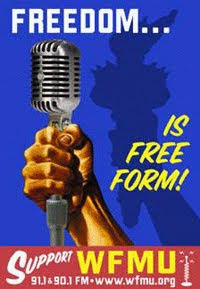 Appreciate free-form radio? Then consider supporting independent station WFMU during its annual fundraising Marathon that runs February 20 through March 4, 2012. WFMU first hit the airwaves on April 24, 1958 at the now-defunct Upsala College and has never looked back. Currently based in Jersey City, New Jersey, WFMU broadcasts at 91.1 Mhz and via a second signal at 90.1 Mhz in Mount Hope, New York. WFMU has also long been an Internet pioneer, streaming its programming 24/7 in multiple formats, including iPhone and Android. Past shows are archived at the station's website, which also features WFMU's entertaining and content-rich blog.

And because WFMU is 100% listener-supported, with zero corporate, government, or other underwriting, WFMU DJs have for years maintained complete autonomy and control over their own programming, which is indeed extraordinarily eclectic. Check out the current WFMU audio smorgasbord, and see for yourself!

Note: The poster shown above was designed by Dave Cunningham for the 2002 Marathon. The premiums for this year's marathon can be viewed here.

Fein and Nader on Constitutional Crimes

Ralph Nader and Bruce Fein, both graduates of Harvard Law School, visited their alma mater on February 8, 2012 to take part in an event sponsored by the Harvard Law School Forum and Harvard Law Record entitled: "America's Lawless Empire: The Constitutional Crimes of Bush and Obama." The Constitution of the United States is housed at the National Archives and Records Administration, along with the other Charters of Freedom.

On Valentine's Day 1962, millions of television viewers watched First Lady Jacqueline Kennedy lead "A Tour of the White House." Initially broadcast on CBS and NBC, the same show aired on ABC four nights later and later was syndicated for viewing in dozens of other countries.

“Students, scholars, and the general public continue to be fascinated by Jacqueline Kennedy and the pivotal role she played in our nation’s history. These new documents demonstrate her work as First Lady, her legendary attention to detail, and the incredible range of her understanding of art, history, and public diplomacy.”

A detailed archival finding aid to her papers can be downloaded; information on visiting the library's research rooms can also be found at the library's website.

Note: The video above is available at the Internet Archive, as part of its Classic TV collection.

As with SOPA and PIPA domestically, opposition is mounting against the international agreements, ACTA (the Anti-Counterfeiting Trade Agreement) and TPP (the Trans-Pacific Partnership Agreement). Both have lacked transparency in the negotiating process and threaten to rewrite intellectual property laws, thereby impacting citizens' rights globally to access content on the Internet and innovate with information technology. The Electronic Frontier Foundation provides further information on ACTA and TPP, and Fight for the Future is sponsoring a petition for people living around the world against the implementation of both.

In Europe, numerous protests are planned for February 11, 2012:

Directed and produced by Doug Wilson, Linotype: The Film is a feature-length documentary about a revolutionary printing technology that like so many others has since fallen into desuetude. The Linotype machine could cast type in complete lines--hence its name--and thereby was greatly faster than manual typesetting. The film documents the views of present-day Linotype operators, and explores the place of the Linotype in the digital age. The world premiere was held on February 3, 2012 in New York City, with additional screenings scheduled around the country.

The Linotype is still used by Route Three Press in Anamosa, Iowa to produce The Wapsipinicon Almanac. The video below was produced by the Gazette's Dave Rasdal and shows Eldon Meeks at work on a Model 8 Linotype.