In 1991, the multinational oil company Shell released Climate of Concern, an educational video warning of the risks of environmental damage on a global scale due to climate change caused by the increasing consumption of fossil fuels. Confidential reports as early as 1986 document Shell's awareness of the risks of anthropogenic climate change, but the 1991 video has not been widely available (WorldCat shows that it is apparently only held by the Bibliothèque nationale de France). The Correspondent recently acquired a copy, and it can also be viewed at their website.

"Alternative Facts" Are Not Facts 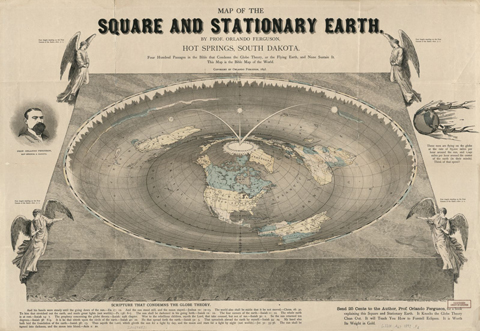 Not only are so-called alternative facts not facts, they are not even alternatives. The Map of the Square and Stationary Earth . . . shown above was published by Prof. Orlando Ferguson of Hot Springs, South Dakota in 1893. He asserts that 400 biblical passages "condemn the Globe Theory, or the Flying Earth, and none sustain it." For 25 cents, Prof. Ferguson offered a book "explaining this square and stationary Earth." He states further that "It knocks the Globe Theory clean out. It will teach you how to foretell eclipses. It is worth its weight in gold."

The Ferguson map was donated to the Geography and Map Division of the Library of Congress in 2011, and is fully described in the Library's online catalog. High-resolution images of the map are also available for download.