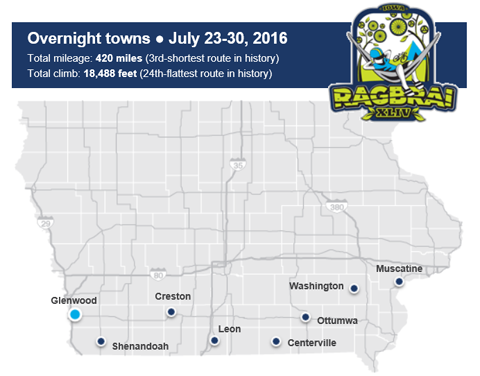 The eight overnight towns for RAGBRAI XLIV, the Register's Annual Great Bicycle Ride Across Iowa, were just revealed at the annual Route Announcement Party: Glenwood > Shenandoah > Creston > Leon > Centerville > Ottumwa > Washington > Muscatine. As has been the case since the inaugural ride in 1973, the ride begins at the Missouri River and ends at the Mississippi River.

This year's seven-day ride takes place July 23-30, 2016, and will be 420 miles in length with 18,488 feet of total climb, making it the 3rd shortest and 24th flattest route since RAGBRAI began. Registration for the world's oldest, largest, and longest recreational bike touring event is currently open, with a deadline of April 1, 2016 for online applications. Lottery results will be announced May 1, 2016.

The incomparable David Bowie [1947-2016] is shown above performing on December 8, 1983 at the Hong Kong Coliseum during the final concert of his Serious Moonlight world tour. The concert featured songs from his recently released album, Let's Dance, including of course the local favorite, "China Girl." As the concert happened to fall on the third anniversary of John Lennon's death, Bowie also sang Lennon's "Imagine," prefacing his moving tribute by observing that it was in Hong Kong that he had last seen his friend, with whom in 1975 he had famously co-written (along with Carlos Alomar) his first American No. 1 hit, "Fame." (Note: The photo here was taken from a balcony seat by the Common Curator with a 50mm lens and 800 ASA film, hence the graininess.)

The Year Ahead: Tempus Fugit