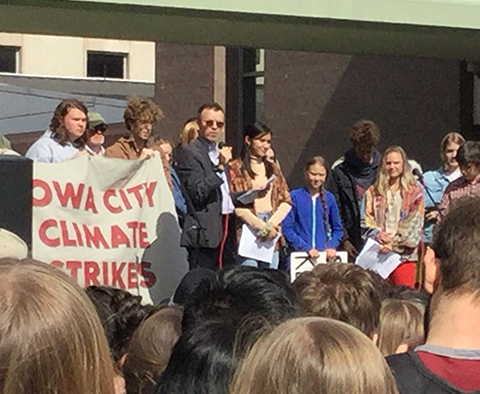 The Swedish climate activist Greta Thunberg led a climate rally attended by several thousand in downtown Iowa City, Iowa on Friday, October 4, 2019. Since beginning her School Strike for the Climate (or Skolstrejk för klimatet) outside the Swedish Parliament in 2018, Thunberg has galvanized millions of youth and adults around the world and become an internationally-recognized leader of the movement to address the environmental crisis caused by fossil fuels.

The video of Thunberg's speech in Iowa City can be seen here; the transcript of her speech is available here. Fellow students from Iowa City, local and state representatives, and others also spoke at the event.

Thunberg has been nominated for this year's Nobel Peace Prize, which will be announced on Friday, October 11. At 16, Thunberg would be the youngest Nobel laureate ever should she win; to date, the youngest winner is Malala Yousafzai, who won the Peace Prize in 2014 at 17. Thunberg is pictured above in a blue jacket.

There Is a Fifth Dimension . . . The Twilight Zone

The Twilight Zone first aired sixty years ago today, on October 2, 1959, and opened with the following voiceover by its creator Rod Serling [1924-1975]:


There is a fifth dimension beyond that which is known to man. It is a dimension as vast as space, and as timeless as infinity. It is the middle ground between light and shadow, between science and superstition, and it lies between the pit of man's fears and the summit of his knowledge. This is the dimension of imagination. It is an area which we call the Twilight Zone.

Employing a variety of genres, notably science fiction, the episodes were often moral tales with a bizarre psychological twist. The show was filmed in black and white, and ran for five seasons on CBS from 1959-1964, totaling 156 episodes. The Twilight Zone has had enduring appeal, and has seen several reincarnations over the decades.

Serling can be seen here pitching the original concept for his series. An early interview with Mike Wallace can also be viewed here. The very first episode was entitled "Where Is Everybody?" and an excerpt is available online. Serling was a highly imaginative and prolific screenwriter, playwright, and television producer, and despite conflicts with Hollywood over corporate censorship, he garnered multiple Emmys and other awards for The Twilight Zone and several of his other works.

A native of upstate New York, the Rod Serling Archives are today preserved and accessible at Ithaca College Library.