At issue was the right of several students to wear black armbands in protest against the Vietnam War and to support the Christmas truce called for by Senator Robert F. Kennedy in December 1965. The students included four members of the Tinker family (John, 15; Mary Beth, 13; Hope, 11; and Paul, 8) and Christopher Eckhardt, 16, who wore black armbands at their respective schools in the Des Moines Independent School District. Mary Beth Tinker and Eckhardt were suspended on December 16, and John Tinker on December 17. The controversy lead the Iowa Civil Liberties Union and the American Civil Liberties Union to support the suspended students, and after losing in U.S. District Court, the case was appealed to the U.S. Court of Appeals for the 8th Circuit, and eventually the U.S. Supreme Court, where attorney Dan L. Johnston argued for the petitioners on November 12, 1968.

In his opinion, Justice Fortas observed that:


"First Amendment rights, applied in light of the special characteristics of the school environment, are available to teachers and students. It can hardly be argued that either students or teachers shed their constitutional rights to freedom of speech or expression at the schoolhouse gate. This has been the unmistakable holding of this Court for almost 50 years."


"In order for the State in the person of school officials to justify prohibition of a particular expression of opinion, it must be able to show that its action was caused by something more than a mere desire to avoid the discomfort and unpleasantness that always accompany an unpopular viewpoint. Certainly where there is no finding and no showing that engaging in the forbidden conduct would 'materially and substantially interfere with the requirements of appropriate discipline in the operation of the school,' the prohibition cannot be sustained." 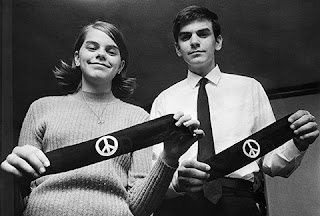 The standard of material and substantial disruption has subsequently become known as the Tinker Test in determining free speech rights for students.

Pictured to the right are Mary Beth and John with armbands, circa March 4, 1968, when the U.S. Supreme Court agreed to hear their case. The armbands originally worn in protest were simple strips of black cloth, unadorned with peace symbols, as shown below by Mary Beth in a photo from December 1965.

The Tinkers have ever since remained strong advocates for free speech and civil liberties, particularly for the young. Mary Beth and John, along with other Tinker family members, guests, and students, are featured in the video above that commemorates the 50th anniversary of their landmark case. The event was held at the State Historical Museum in Des Moines on February 22, 2019, and aired on Iowa Public Television. 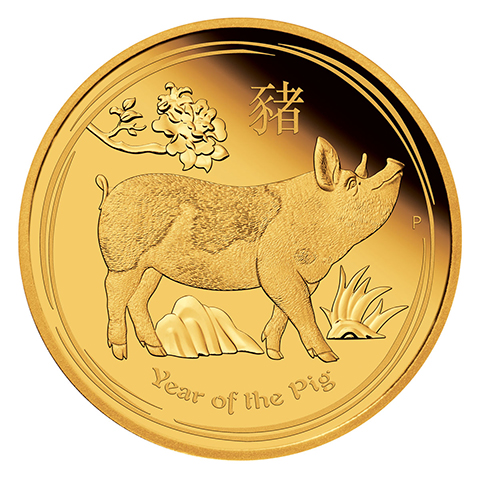 The image above is featured on the reverse of a 2019 Australian gold proof coin issued to commemorate the Lunar New Year. The coin was struck by the Perth Mint and has a nominal value of $15 Australian. The obverse of the coin depicts the effigy of Queen Elizabeth II, which is based on the design of Ian Rank-Broadley.

Buddy Holly, Ritchie Valens, and J.P. "The Big Bopper" Richardson all played their last concert, which was part of the Winter Dance Party Tour, at the Surf Ballroom in Clear Lake, Iowa. Headed out to their next gig after the show, a plane crash killed all three and the pilot, Roger Peterson, shortly after takeoff at around 1am on February 3, 1959--60 years ago today.

Musician Don McLean released the song, "American Pie," which references the tragedy, on the American Pie album in 1971. In 2017, the song was selected for the National Recording Registry at the Library of Congress. The above video depicts a live performance at the BBC in 1972.