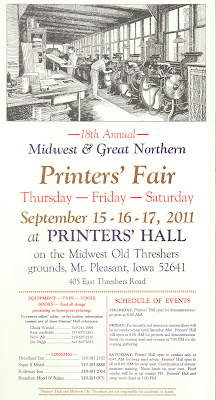 The use of a wide variety of presses and equipment will be demonstrated, and fair-goers will have the opportunity to gain practical training and hands-on experience. A swap meet will take place on Saturday, September 17, where type, equipment, and other materials will be offered for sale. For further information, visit the Midwest Old Threshers website.

From the Cradle to the Cave: Poster Exhibit 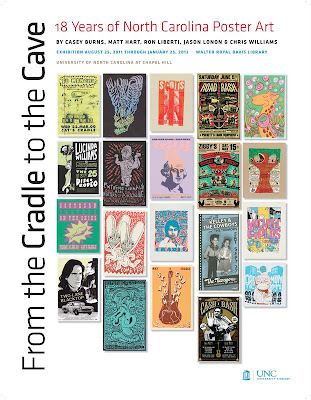 An upcoming exhibition at the University of North Carolina's Davis Library will feature five local artists whose posters have captured the vibe of the Chapel Hill music scene over the last two decades. From the Cradle to the Cave: 18 Years of North Carolina Poster Art will open August 25, 2011, with a reception at 5pm, followed by a panel with the artists (Casey Burns, Matt Hart, Ron Liberti, Jason Lonon, and Chris Williams), and a concert by The Kingsbury Manx. All events are free and open to the public. Further information is available online.

Asheville BookWorks is soliciting entries for its seventh BookOpolis, an annual exhibition and celebration of artists' books and prints. Located in West Asheville, North Carolina, BookWorks is a vibrant community center for the book arts and printmaking. Entries for BookOpolis 2011 must be delivered during the period, August 29 to September 2, 2011; submitted works will be exhibited during BookOpolis weekend, September 23-24, 2011.

Juror Eileen Wallace will then make a selection of the best work for extended display through November 28, 2011. A prospectus with further details, as well as an entry form, is available at the BookWorks website.

The video above depicts highlights from BookOpolis 2010, and was produced by Eagles Way Productions.

Street Books: A Mobile Library for the Homeless

Street Books is a mobile library for the homeless founded in June 2011 in Portland, Oregon, by artist and writer Laura Moulton. Relying on the honor system, the library grants patrons a library card and borrowing privileges without proof of residence or other identification. A card catalog system is used to track books although no due dates are utilized; patrons simply return books when finished.

Street Books is powered by a specially constructed three-wheeled bicycle to transport and display books for lending. As part of the project's documentation, Moulton maintains the Street Books blog, which records her interactions with some of the library's many borrowers. A grant from the Regional Arts & Culture Council helped establish and staff the project.

The short documentary shown above was produced by Travis Shields; Street Books was also featured in a recent Library Journal article.

The Carrboro Film Festival, started in 2006, is now taking submissions of all short films and videos (under 20 minutes) for the 2011 festival. Entries may be submitted online by "any filmmaker who has breathed the good air of North Carolina sometime in their life." The early deadline is August 20, 2011, with a $10 fee; the late deadline is September 30, 2011, with a $15 fee. The festival will be held Sunday, November 20, 2011 in Century Hall at the Carrboro Century Center. "Submit," the video above, was produced by Beery Media. Further details about the submission process can be found on the festival website.

Never Trust Anyone (or Anything) over 30?

Whatever the answer to that question, MTV, or Music Television, is now officially over the hill. Launching at 12:01am on August 1, 1981, the inaugural music video was The Buggle's "Video Killed the Radio Star." Eighty-seven videos were shown the first day, with The Who's "You Better You Bet" the first to go into rotation, being played twice; Rod Stewart was the first performer to have multiple videos played. For the curious or nostalgic, a number of videos from the first day are compiled at MTVtheFirst24 on YouTube.

At the other end of the cultural spectrum, a "shout-out" is due Herman Melville, who on August 1, 1819 was born in New York City.