The March for Our Lives against Gun Violence 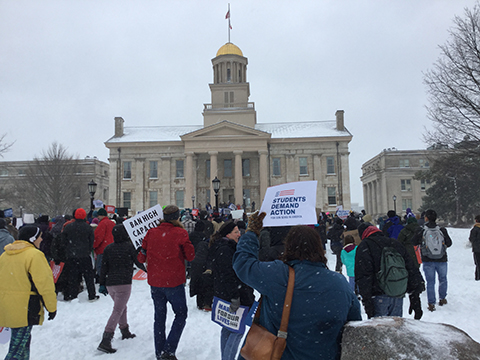 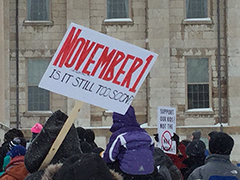 Hundreds of young students and adults from the Iowa City community marched from College Green Park to the Old Capitol to demand an end to epidemic gun violence in schools and society at large. Organized by local student groups, the rally featured a number of speakers who addressed the urgent need for gun policy reform. The event on March 24, 2018 was one of more than 800 held across the U.S. and globally as part of the March for Our Lives movement that started after 17 students were recently killed in a mass shooting at the Marjory Stoneman Douglas High School in Parkland, Florida.

One participant's sign at today's protest commemorates the tragedy of November 1, 1991, when a mass killing perpetrated by Gang Lu occurred at the University of Iowa. It began in Van Allen Hall and ended in Jessup Hall, which can be seen immediately to the right of the Old Capitol in the photo above. For related information, see also the Common Curator post, Twenty Years After.

The Iowa City Press-Citizen covered the March for Our Lives, including publishing the text of a sixth-grade student who spoke at the rally. For further research into the problem of gun-related violence, the Gun Violence Archive has compiled extensive statistical data from the entire United States.

As a measure of the political influence of the National Rifle Association (N.R.A.), the New York Times has published a list of the top ten members of both the U.S. Senate and House of Representatives who have received N.R.A. contributions. Arizona Republican Senator John McCain leads all politicians, having received over $7.7 million, and the first-term Republican Senator from Iowa, Joni Ernst, has received over $3.1 million. One of Ernst's campaign videos for the 2014 election, entitled "Shot," featured her shooting a weapon while a voiceover narrator states: " . . . once she sets her sights on Obamacare, Joni's gonna unload."